When I started this playwright’s blog, I wasn’t interested in whining about the reasons why theatres don’t produce more plays by women in general (or me in particular, let’s be frank) or the politics of production or the reasons the whole industry is at once relentlessly P.C. and yet so damn conservative.  I wanted to write my plays and  blog about the impulses that led me to them.  I wanted to understand process and come to a better understanding of my craft. But as the man said, life is what happens when you are making other plans–and in my case, and yours, since you are reading this–life is apparently what happens because you haven’t yet run into the business end of a .223 caliber Bushmaster rifle. And so we get to keep on breathing by virtue of the sheer dumb luck that, for now at least, we are not in some lunatic’s line of fire. And this realization, along with my outrage over what happened at Sandy Hook Elementary last week, has stirred me from my petty self-absorption to, shall we say, a vigilant stance. 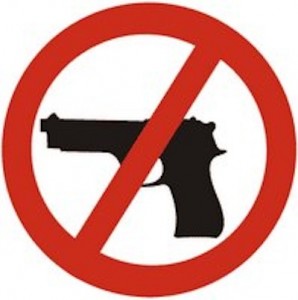 Given the insane gun policy in this nation, the chances of any one of us being blown away in a random act of extreme violence is just too damn high. All it takes is for you or me to be at the wrong place–in front of the FBI Building, for example–at the wrong time–the exact moment when the lunatic du jour pops another 30-round magazine into his Glock—for us to be prematurely dispatched to that great big Arsenal in the sky.

Realizing their vulnerability after Columbine, schools undertook efforts to protect their students from armed gunmen. They stepped up security, they instituted “drills” so kids could practice how to run and hide. As a teaching artist, I happened to be on hand one day during just such a drill, and I found it surreal—the teacher locking the schoolroom door, the kids quietly huddling in a corner, and h how matter-of-fact the discussion afterwards.

But there is just something seriously sick about this, when school children have to engage in “drills” to train them how to avoid a mass murderer in the hallway–instead of the rest of us actually DOING SOMETHING to prevent there being a mass murderer in the hallway.  Back in my day, all we had to contend with in school were the usual bullies, occasional fire drills and predictable Friday afternoon bomb scares—it was the 70s after all—and  for most of us, the bomb scares just meant an excuse to get out of gym class. Today, we have gunmen who shoot their way into the building and massacre six year olds en masse. And if we can’t come up with some way to stop atrocities like that, then we might as well pack it in and return to the cave, because we do not live in anything approaching a civil society.

So what to do? Or more to the point, how to do it?

Not surprisingly, the internets have been afire since Friday with all sort of posts decrying the horror of it all, lamenting our lame gun policy, lambasting the National Rifle Association (mea culpa) and using Facebook as a public forum to express a general sense of outrage, disgust, and helplessness. (Interestingly, the NRA has disabled its Facebook page.) Vigils have been organized and protests are threatened. But for a truly compelling rant about how to really kick the shins of big gun, read this guy. Drew Magary argues that the real target of our frustration should not be the NRA and its four million dues paying members, but rather, the money interests behind the NRA itself.

This is a once respectable organization that now largely serves as a front for gun makers–Smith and Wesson,  Sig Sauer,  Glock,  and Bushmaster, among them. The latter three are the makers of the weapons used at Sandy Hook, and not one of these manufacturers has seen fit to issue so much as a public statement of regret or condolence. Seems like some kind of statement ought to be in order, but then, what do  you say to someone whose six-year-old is dead because you have been pushing the most laissez faire gun policy imaginable? So sorry some lunatic used our product to mow down your kid, but remember, guns don’t kill people … people kill people. (Especially people armed to the teeth with your semi-automatic sidearms; they kill a lot of people very quickly, but why quibble over details?)

At any rate, Magary’s point is that the people who profit from mass murder (profits fed, he maintains, by the subsequent outcry for gun control that then spurs a follow-up frenzy of gun buying by gun rights advocates) are, in fact, the top executives of companies such as  Bushmaster, Smith & Wesson, Glock and the like. And it is they who are behind the NRA’s hard-right, take-no-prisoners, slippery-slope lobbying stance and who conveniently avoid any kind of public attention and anything that connects them personally to the grossly immoral policies they espouse.

According to the Nation, gun makers have contributed at least $38 million to the NRA’s coffers since 2005, though the actual amount could be much higher. And therein, as the man said, lies the rub. Because these guys have a lot of money to throw around and as we know, when it comes to Congress, money talks. And money walks. And money smokes big fat cigars and writes the legislation. So yes, we’re dealing with a well-funded lobby of no discernable conscience, coupled with the duly documented cowardice of our elected officials who fear the NRA and its four million dues-paying members. No way you can fight that.

Or so the conventional wisdom goes. But we used to think Big Tobacco was invincible, too. And for many years, it was. When I first went to work, thousands of years ago, offices were horribly smoky places; just about everyone puffed away, and anyone who expressed offense at the indoor air pollution was politely regarded as a crank. Today, smoking is verboten on cross-country flights, on trains and buses, in public buildings, in private offices, in restaurants, hotels, and bars—and smokers have been banished to the street to pollute their lungs in the chill air, alone.

So call me idealistic, but I think the gun lobby can be defeated, and it may be that Magary has a point. It may be that the way to begin this “public conversation” about gun control is not with another nasty letter to the CEO of the NRA. It may be time to go straight to the heart of the problem—perhaps a well-worded letter or better yet, ten thousand well-worded letters, to the likes of Ron Cohen, CEO of Sig Sauer, or to Richard Dyke, CEO of Windham Weaponry (former CEO of Bushmaster and now a friendly neighborhood manufacturer of assault rifles).

Here is Windham’s “team.” Aren’t they sweet looking guys?  Perhaps Dyke would like to explain how much money Bushmaster directed to the NRA over the years and why he so firmly believes that people like Nancy Lanza–the late departed gun-loving mother of the Sandy Hook shooter–needed to have a home arsenal. (Because if you like, you can get a Wyndham gift certificate for that special someone in your life.) Perhaps for every dollar these guys pump  into the NRA and its hard-line lobbying efforts, they might consider donating an equal sum to the cause of improving access to mental health treatment in this country. Surely Adam Lanza–and most of Newtown, CT–would have benefitted from that.