Some years ago I came across a funny yet utterly serious book called “Worst Case Scenario Survival Handbook” by Joshua Piven—a guidebook on how to survive a series of unlikely disasters—from an avalanche to a shark attack to the crash of a jumbo jet. So I immediately bought a copy for  an artistic director who has suffered through enough near misses over 25 years of running a not-for-profit theatre to write a guidebook of his own. John is also a risk-taker dedicated to new work and has a keen eye  and a lot of good advice for writers.  Early on, his advice to me was that I needed to “raise the stakes” for my characters, another way of saying I needed to put more pressure on them—because it is only under pressure that character is revealed. 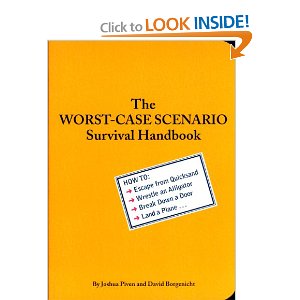 It is true in life and true in drama that the way we deal with mess says a great deal about who we really are. The same fire that melts the fat hardens the iron—to borrow a borrowed phrase from some advice columnist I used to read religiously like a fool  (she gave a lot of bad advice). But it is also a no brainer to say that any character in desperate pursuit of something is always more interesting than someone who can wait another week or so and won’t suffer for the delay. What audiences want—savages that we are—is to watch someone suffer–intensely. The more agony for the character, the better for the story and the more interested are we in the outcome.

James Stewart’s manically lovesick detective in Vertigo comes to mind—it is part of what makes that improbable (and creaky) ghost story so watchable 60 years later. Nobody suffers better than James Stewart, but most of us are not going to get a Jimmy Stewart to play our leading man, so what we lack in spectacular acting talent we have to make up in a riveting script.  (Not that Vertigo isn’t riveting, but you have to admit it does defy logic. Why, for example, would anyone cook up such a convoluted murder plot that hangs on such an unpredictable element—the detective’s inability to overcome his fear of heights? Scotty conveniently falters on the bell tower stairs, but he could just as easily have closed his eyes and charged ahead, at which point the whole plot would unravel. And then there is the murderer’s great good luck in escaping the bell tower undetected—apparently because no one without vertigo bothered to go up the tower steps to investigate what actually caused the victim to fall.)

But plot weaknesses aside, Vertigo is a terrific example of a character under extreme pressure. The woman Scotty thinks he adores is actually someone else, hired to use him as a pawn in a plot to fake a suicide as a cover for murder.  And once the real Madelyn dies, clueless Scotty is skinned alive during the inquest that follows, as an investigator coldly concludes that his cowardice was a greater cause of Madelyn’s demise than the mysterious emotional upset that sent her up the tower. Who wouldn’t end up catatonic in a nursing home after that?

We have to admit—when it comes to scenarios for losing your sweetheart, this has to be one of the worst case scenarios of all time—as well as one of the more original.

This, then is a useful question to keep in mind when sketching out the scenario for your play. Aside from the obvious–have we ever seen this before?–we need to ask ourselves how we can crank up the pressure on our characters.

Yes, But – or You Think You Have Problems

Let’s consider a sad situation that is not all that rare: A boy returns home from college after his father dies unexpectedly.

And thus Hamlet’s dilemma and thus, we have a play that has fascinated audiences for 400 years.

So here is an exercise. Let’s take our sentence from Breaking the Block Part 2:  Marsha Norman’s five-sentence exercise has led me to this scenario for a new play:

In 1930s Moscow, a man with a phenomenal memory is targeted by Stalin’s persecution machine when he is unable to forget an incident that undermines the official story about the fate of a high-ranking Soviet official.

While it seems to me the stakes are already high—we are talking about survival in a totalitarian state—it is useful to remember that the play will necessarily break down into a series of scenes—and we want high stakes in every scene. So for the purposes of the exercise, l’ll focus on the scene that will introduce us to our man Alexei and the psychologist who treats him.

In the original—as this is inspired by a true story–the memory man comes to see the doctor because he has been referred for testing by his editor. It seems, as a reporter, he never takes any notes, yet he never gets anything wrong. The editor is mystified.

That is interesting, but is it very dramatic? One question to ask is who has the greatest need? The doctor, the editor, or the patient?  In this case, it seems to be the editor—and he is not a character I am interested in, so I will need to invent another reason for Alexei to call on the doctor. And because I don’t want a play for three men—I have already decided that the doctor will be a woman.

For the purposes of this exercise,  I will muddle with the “yes, but” approach above and report on the results next week.