Salvation Road opens tonight with a cast of thousands ….

It has been a long process developing this play, a comic drama about a boy searching for a sister who has disappeared into a fundamentalist cult.

Originally a one-act for three actors (hated that version) the play underwent a massive rewrite in the summer/fall of 2008. I got up my nerve to stage the retooled one-act version, but on advice of a high school drama director — the fabulous Jennie Eisenhower — I developed it into this version, a full-length for 15 actors.  Jennie did not think the subject matter would intimidate a lot of schools, but the cast size–five to eight actors–would discourage a lot of high schools. A cast of 15 to 16 would be a much easier sell. With that in mind, I revised the play into a large-cast version. It subsequently received a developmental workshop at The Utah University Youth Theatre in 2011 as part of the American Alliance for Theatre in Education’s Playwrights in Our Schools Program.  This year the play was accepted for development during NYU’s New Plays for Young Audiences workshop at Provincetown Playhouse this summer. Ironically, the Provincetown project focused a full-length with a small cast (six actors doubling into nine parts).  This is the first time I’ve written a play with two versions–one aimed at professional production, and the other aimed at the youth theatre market. 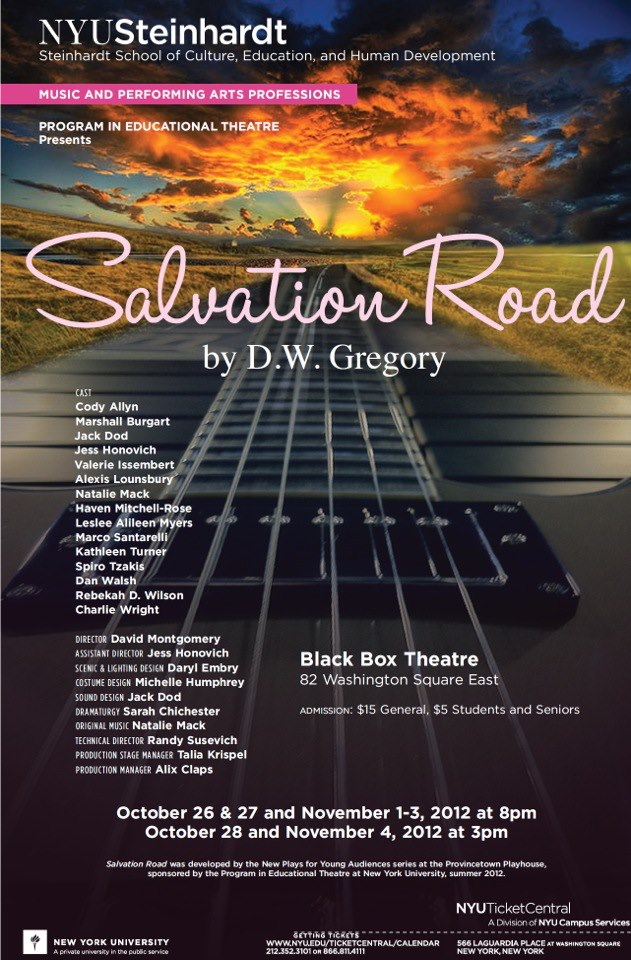 The  Theatre Department of the Steinhardt School at New York University trains drama teachers — and there could be no better match for this play than a premiere of the full-length youthversion in a departmental production. It is a challenging topic for young actors and for their audiences, but I strongly believe young people have more going on inside than many of their teachers, and sometimes parents, appreciate.  My hope is that schools across the country will not be put off by the subject matter, but will embrace this play as an excellent opportunity for their students to explore issues of faith, spirituality, conformity, and control through the story of two boys caught up in the cult phenomenon.

The next stop for Salvation Road is a production at Walden Theatre in Louisville, Ky., Nov. 8-18. I’ll be going out there for a post-show discussion.