Trolling through Google with coffee in hand is a favored Saturday morning time-waster, but this morning I came across a stunning discovery — Google images, more than 100, of various productions of Radium Girls.

This visually arresting production, directed by Elaine Vaan Hogue at Boston University, was one I had the privilege to see.

But there are many others, some obviously more successful in the design and execution. The play has not made a big impression in professional theatre — but in universities, high schools, and now community productions, the story is told and retold. Fascinating to see how different and yet how consistent the interpretations seem to be.

For instance, the original production at Playwrights Theatre of New Jersey, directed by Joseph Megel:

And this production at Point of Contention Theatre, Chicago:

That’s my friend Annie Passanisi in the center.

This production, directed by Jamie DesRocher, was performed in a black box space so tiny that I could not have envisioned staging it there at all. Had they asked me I would have said don’t do it there– and yet it worked.

The Chicago Stage Review had some nice things to say about the show (“a genuine theatrical treasure”) and went wild about the promotional poster: 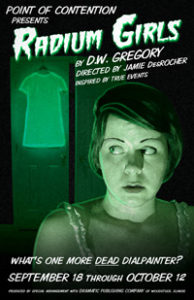 Which I found hilarious myself.

Even though designer Brett Walker’s “take” with this poster did not quite convey the design or aesthetic of the production itself, I just loved the irreverence of it.

What is especially interesting, though, are the numbers of high school and now university productions, in which eager young actors take on what I think is a difficult script and embrace it with humbling enthusiasm — humbling for me, that is.

The watch dial shows up in a lot of productions. This one is from Randolph Macon College.

And the head scarves are consistent from show to show … though in reality I don’t think the girls ever wore them. That was a device from the original production that I suppose other producing groups simply pick up and use because they assume that’s how it’s supposed to be:

This is actually a terrific looking show for a high school.

As was this one:

I did not see the production but did meet the cast, and they were a terrific group of young actors who hit me with some interesting insights into the script — one in particular: Why are all the guys such jerks?

Well I had not thought they were, but you can’t get around the fact that covering up an industrial poisoning does not make you an especially sympathetic character. Though I do think I worked pretty hard to make Arthur Roeder a more complex character — whose actions you deplore even as you sympathize with his plight.

So I am looking forward to another year of Radium Girls coast to coast. The play has now surpassed 200 productions and so far, there are seven lined up for 2012 – 2013, including shows in St. Louis (St. Louis University), Salem, Oregon (Pentacle Theatre — month-long run!) and Naugatuck, CT. (of all places, Shakesperience Productions Inc. What? Well I won’t argue.)