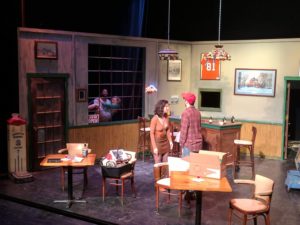 Colorado 1982: Thwarted lust and bruised ambition rule in Dan Briggs’ bar. Judy, the quick-witted bartender, never lets her disability get in the way of what she wants – except when it comes to Dan, who only has eyes for Bonnie, a comely waitress with dreams of becoming a Playboy centerfold. Unknown to Dan, Bonnie’s ticket to fame relies on an elaborate scheme–cooked up by his best buddy Chet–involving a classic motorcycle and a secret photo shoot. Chet’s plans seems to be working out – until the photos of Bonnie fall into the wrong hands.

For tickets, go to the Baltimore Theatre Project at  https://www.theatreproject.org/