Memoirs of a Forgotten Man is now in print! London-based Bloomsbury Press recently announced the release of “Plays by Women from the Contemporary American Theater Festival,” under its Methuen Drama imprint. 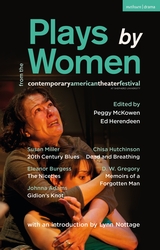 In addition to Memoirs of a Forgotten Man, the anthology includes Gidon’s Knot,  by Johnna Adams; The Niceties, by Eleanor Burgess; Dead and Breathing, by Chisa Hutchinson, and 20th Century Blues by Susan Miller.

Bloomsbury describes the collection as follows:

“This anthology of work provides plays that speak to one of the most compelling virtues of artists everywhere – freedom of speech. A necessary volume of women playwrights’ work, ranging from a two-time Obie Award-winning author to emerging writers just beginning their careers, it represents a group of women who vary in age, race and sexual orientation and offers an invitation to artistic leaders, scholars and students to embrace gritty, thought-provoking new dramatic work.”

Memoirs made its world premiere at CATF in July 2018 as part of a National New Play Network rolling world premiere. It will be produced next at Shadowland Stages in Ellenville, N.Y., in June 2019, under the direction of Brendan Burke; and in August 2019, at New Jersey Repertory Co. in Long Branch, N.J., directed by James Glossman.