Some amazing news came to me through Google Alerts a little while ago.

I’d set up a weekly tracker to follow productions of a few published scripts. Most of the time it highlights calendar listings and occasional features about productions I was already aware of, but it’s a nice way to catalogue press coverage. Once in a while you get a quotable gem, but not too many surprises. 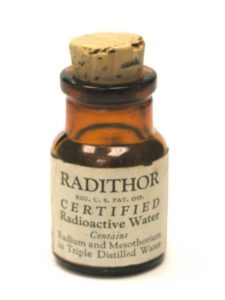 Except for the alert I received the day after Christmas. I knew that Seton Hall University had a production going in the fall. But I didn’t know that Seton Hall had selected RADIUM GIRLS as its summer reading assignment for  its incoming freshman class last year.  That’s 1700 students, roughly, who were required to read the play and discuss it in freshman seminar as well as in other courses. A whole lot of buzz.

This news came to me when Google Alerts swept up an announcement by the university about two of its student winning an essay contest inspired by the play.

According to the announcement, student Gabrielle Hunt wrote about “modern day ‘slut-shaming,’ or the act of making a person, especially a woman, feel guilty or inferior for certain behaviors or circumstances that deviate from traditional gender expectations. She suggested that the radium girls exemplify what it means to be confident in who you are and stand up for yourself.” And student Patricia Boccard focused on the theme of corporate responsibility by relating the radium girls’ story to the current domestic debate surrounding hydraulic fracking.

Seton Hall is located in South Orange. N.J.—very near where the play is set–so the story of the Radium Girls is a home-town tragedy with many echoes into the present day. The factory where it took place was an EPA Superfund site that only recently has been dismantled.

All of which is to say – 15 years and more than 300 productions after its world premiere, RADIUM GIRLS is still going strong in ways I never began to anticipate when I was struggling through the early drafts. It is gratifying to see how the play has generated so much reflection and connection over the years. Even though the story focuses on women who lived and died nearly 100 years ago, it is still relevant and still compelling. And I still get email and Facebook friends requests from actors who’ve worked on productions and say it was one of the most rewarding experiences in their young careers.

As I wrote before, I finally succumbed to pressure from my publisher to write a one-act version for school competition – something I’ve been thinking about and dragging my feet about for a long time. It wasn’t until my friend, high school drama teacher Steven Barker leaned on me to do it – with the promise of a workshop with his students at Camp LeJeune High School—that I finally got off the dime and went to work.  Steven and his students performed the play in competition in the fall of 2013 and in the early winter of 2014, Susan Choquette, director of theatre arts at Andover High School in Andover, Mass. staged the competition version in the 2014 Massachusetts Educational Theatre Guild Drama Festival. It was one of fourteen plays out of 117 initial entries to advance to the final round and netted a number of awards in acting, design, and technical excellence for her students.

For a long time I had simply felt overwhelmed by the prospect of whittling my script from 2 hours and 10 minutes to 40 – but with Steven’s help, I found a way in—a tighter frame for that sprawling story. I ended up with a 60-minute version that you can pare to 40 by removing selected scenes. The one-act version is coming soon from Dramatic Publishing and promises to do well. So far, even before the script is out, we’ve got nine schools lined up to perform the competition piece this spring.

On days like today, when my head is still swimming from a back-to-back rejection letters, I think about the projects I’ve undertaken that have had the greatest impact. You never know who you will reach or how. It may take many years, but there are unexpected payoffs. That’s why, when it comes to the arts,  faith is the most important virtue. Faith and perseverence. I have a hard time remembering it, but every now and then the universe sends a warm reminder.