I’ve cribbed this photo below from the blog PQED—it depicts a demonstration of Open Carry activists in Texas, claiming their second amendment rights to scare the crap of any thinking person nearby. They’ve made a cause of toting their assault rifles into such dangerous zones as fast food restaurants and discount department stores, all in the name of freedom—or what passes for it in this country. I don’t know about you, but if I ever see a parade like that coming in my direction, I’m getting the hell out of there,  which is, effectively, what PQED advises. The best way to respond to Open Carry is to leave the place at once, and don’t bother to pay before you go. Let the gun activists pick up your tab. 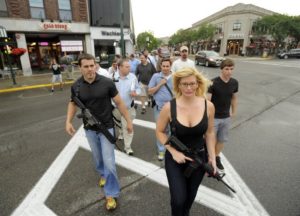 As I was writing this post today, another news item popped up on Facebook illustrating the obvious hazard from too many people wandering around with guns. Late-night partying in Indianapolis ends in tragedy when one guy bumps into another on a crowded street—and both are armed.

This raises the question of what happens when Open Carry meets Stand Your Ground. Guessing the answer will be–more of what happened in Indianpolis last night.  It’s only a matter of time before someone mistakes one of those Open Carry demonstrations for a crime in process and decides to make a pre-emptive strike.

If nothing else, this latest round of madness illustrates just how far around the bend we’ve gone in this country. After so much senseless slaughter committed by crazy people with assault rifles, this is where we’ve come—celebrating the right to own and carry the mass killer’s weapon of choice by marching them into commercial enterprises.

Open Carry sees itself as the protector of gun rights under assault—the threat coming, I presume, from wild-eyed liberals like me who’ve read the rest of the Constitution and know something about punctuation. (We can have that argument in another post, but suffice it to say there are two clauses to the Second Amendment, not just the one the National Rifle Association likes to quote.) The right of peaceable assembly is also in the Constitution, and I think a good argument is to be made that Open Carry demonstrations infringe on that right for shoppers and diners who find the display of armament so unsettling that it prompts them to disperse. These kinds of demonstrations, I suppose, are also meant to show that those fine Texas Patriots™  just ain’t scared of us wimpy members of the literate set, though they sure don’t mind terrifying anyone with the common sense to be concerned that maybe, just possibly, that thing they are carrying could go off by accident. Whether they intend it or not, let’s hope their own foot is the only casualty.

The purpose of Open Carry, the group claims, is to “condition” the populace not to be fearful of fellow citizens exercising their right to carry firearms openly. Well and good until one of those fellow citizens turns out to be another Adam Lanza or Eliot Rodger. How we’re supposed to tell the difference, I don’t know—it’s not like the maniacs go around with sticky notes on their foreheads proclaiming “I’m a gonna shoot you now.” Used to be the sight of an AR-15 coming down the street was indication enough, but thanks to open carry laws—and the National Rifle Association, which has lobbied for them—it’s harder to tell whether you’re confronting a maniac with a grudge against all of womanhood or simply another  upstanding American dude exercising his constitutional right to behave like an ass.

This post from the PQED has been shared about on Facebook (thanks John Bailey for the link) and the discussions it generated are riddled with the usual straw-man commentary from the gun rights corner. This one is a particular gem:

Only the ignorant are scared of inanimate objects, even if cars kill 30,000+ people in the US every year, but here are some FACTS: You are 367% more likely to be killed in a car than by any firearm in the US, and your chances of being murdered in the US are about .0028%

Assuming he’s got his numbers right – so what? One thing has nothing to do with the other. Your chances of dying from cancer or heart disease are also significantly higher than the likelihood you’ll be shot to death –  that doesn’t make you any less dead if someone’s assault rifle goes off  at Wendy’s while you’re in line at the salad bar.

Every time I see postings like that one, I harken back to my friend Forrest, back in the day, flipping through a gun catalogue in the newsroom and snickering loudly. Forrest was an editor and fellow columnist at the Columbia Tribune, and he was never short of pithy (and sometimes crude) commentary about whatever stupid event had occurred at the hands of some local ignoramus in mid-Mo. I asked him what he was looking at—and he showed me–image after image of pistols and revolvers with impressively long, shiny barrels. “These things,” he said, “are for guys whose dicks don’t get hard.”

I don’t think I’ve ever heard a more succinct summation of the Open Carry movement.

And when I see those parades of fools—and that’s the word that applies, fools—toting their assault rifles into grocery stores and fast food restaurants and coffee shops and discount department stores, all I can think is that they must desperately need a sense of power. A sense of potency.  And they don’t have it, because they need a gun to give it to them.

So they are armed and they want you to know it. They are armed, by God, because it’s their constitutional right and how dare you suggest that rights come with responsibilities? They are armed because their AR-15 is the only thing that stands between them and a government plotting to overrun us all and seize all of our guns—every single one of the 300 million plus guns in circulation in this country—you bet, the government is out to get them, you just wait and see. If you don’t think so, you’re stupid and read all the wrong magazines. Speak one word about gun registration or background checks or basic gun safety or a ban on assault weapons or—you Commie!—smart weapons, and you are part of the evil liberal plot to deprive true blue honest Americans of their God-given right to pack heat anywhere and everywhere they want. Because, by golly, gun ownership is a right. But driving a car–now that’s a privilege, and that’s why car registration is okay but gun registration is a Communist plot.

And let’s not forget, you know, that sometimes the tree of Liberty has to be watered with the blood of tyrants.

Though most of the time, it’s the blood of innocents that ends up on the ground.