I confess to a panic attack the other day when I realized that not only  am I behind on the promised scene, I cannot tamp down my anxiety to write it. The excuses are piling up—production, yadda, hurricane, yadda, production, yadda, nostalgia tour, yadda, yadda, yadda—and now the latest: a nasty flu, which I soothed with multiple toddies  (yes, there was whisky involved, sue me) and homemade soup (leek and potato, recipe to follow. I do try to please.) 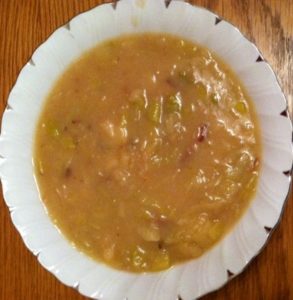 Chopping leeks had me thinking about what my characters might be having for supper on a Sunday night, and it occurred to me that I ought to scout out a Russian cookbook somewhere, circa 1930 (but in English please!) to get a sense of what Alexei’s mother might put on the table. Then again—a 1930s cookbook would have to be approved by The Party, I imagine, and would a bowl of Communist borscht taste different from the pre-war Tsarist variety? Alexei’s mother in 1930 would be at least 50 and presumably have learned to cook sometime before the turn of the century and very likely, with no assistance from formal recipes at all, so I imagine what she put on the table would be in no way influenced by Party approval but certainly by any going food shortages at the time.

All this ruminating takes me back to my basic problem: To write a scene of any authenticity I have to know a little bit of something about the characters and their physical world, and for this play especially, I feel a deep need to immerse myself in the culture and currents of the era. For book research, I have turned to the brilliant Orlando Figes and his phenomenal account of ordinary life in the Soviet era: The Whisperers: Private Life in Stalin’s Russia. (Even as I write these words I realize I need even more than that. A book alone will not do it—I need a tangible experience, but a visit to Red Square in not yet in the cards.)

Forty pages in, the takeaway from Figes’ work is the extreme intrusion of the Soviet state into the private lives of its people, the widely accepted understanding that privacy and personal happiness are luxuries that the people can no longer afford; their focus must be to build the ideal (Communist) state, and to do so, they must cast aside any notion of a personal life. It is heartbreaking in its idealism, realizing the number of lives shattered by the grinding machinery of Stalin’s police state. Even those of the truest believers.

But one of the bitterest ironies of the Soviet experience, it turns out, is the degree to which the class structure of the Tsarist era was not demolished under Communism; it was merely reconfigured. Figes reports that “elite attitudes took root very quickly in the families of Bolsheviks, and they were passed down to their children. The majority of Soviet schoolchildren took it for granted that Party members had a higher status than other members of society … left to themselves to decide a dispute between two boys, the other children usually decided in favor of the boy who claimed priority on the grounds that his parents were Bolsheviks.”

Reading all this, it is not a silly notion to wonder what status a bowl of leek soup might have enjoyed in 1930s Moscow. And what might the official Communist Party cookbook have said about it—if in fact, there was one (I imagine yes there must have been)—would the Party have approved of such a delicacy?  It must have approved of beets and cabbage—and surely of bread and potatoes—but the leek seems like such a—I don’t know—bourgeois vegetable.

As it turns out, there was such an official cookbook: The Book of Tasty & Healthy Food, issued by the Soviet Ministry of the Food Industry, available on Amazon. First published in 1939, the tract is now considered a “canonic symbol of Soviet propaganda,” according to the intro, because the assortment of foods described in it was almost never available to the average Soviet citizen. A quick scan reveals recipes for various potato soups, but none with leeks.

This seems a more delicate recipe than my robust Irish/American version, below, and has the advantage of not requiring bacon. The recipe bears exploring—along with a number of other recipes, including vanilla keks. And there is no question I have a long way to go to get myself to a level of comfort with this time and place.

Food as a Tool for Character

Nevertheless, all of this illustrates the powerful use of food in delineating character and relationships: whether there is enough or too little, what the contents of the cupboard reveal about the state of the household; without having to say it, without requiring the characters to discuss it, what can the menu say about where the family stands in the hierarchy of Soviet life, about whether their fortunes are rising or falling. Is it brown bread on the table, or white? Is there butter or none? Is it a cream soup or a weak broth?  And what does the menu say about the characters themselves? Is the soup on the table the same sorry grey mess his mother always serves up—or does she take pride in this role as homemaker and labor over lunch? Does she serve up her son’s favorite recipe as best she can despite the shortage of onions in the market—and do they speak of this at all, or is there an agreement not to discuss it? Or might Alexei, with his phenomenal memory, reconstruct for his mother the sweet experience of the last, best, exquisite Easter meal they enjoyed together before the October Revolution?

How much of a character’s identity–and ours–is bound up in the ritual of shared meals? Is a sense of one’s own dignity inextricably tied to the ability to sit down to three courses, a little wine, a slowly savored cigarette at the end of the evening? And do the disruptions to those rituals cause a rupture in the character’s sense of herself? Class anxiety has always revolved around the ritual of meals. I remember my panicked reaction the first time i encountered mint jelly at a meal and instead of eating it on the lamb–I had never before tasted lamb–I committed the horrific faux pas of smearing it on my dinner roll–and finding it a fine flavor. How do these class anxieties play out in a culture in which the high ideals of the Revolution have run aground on the limitations of a culture that cannot break out of its need for heirarchy and ultimate authority?

1.5 lbs. of chicken thighs or drumsticks, with skin, preferably free-range.

2 lbs of leeks, white bit only (if the leeks have a lot of green you’ll need more

because you’ll chop a lot away)

The secret is fresh chicken stock made from free-range chicken.

Why I love this recipe: